In Model Drawing, we draw boxes to represent numbers. We can take the idea further by using symbols instead of boxes. The concept is based on algebraic thinking and will make it easier for young students to understand Algebra in later years.

This question involves fractions. In Drawing Models, we think of fractions in terms of units. In Using Symbols, we draw pictures such as triangles, stars or anything that is easy to draw.

I'm going to draw stars for this example.

Since the pencil is compared to the pen, each part is of equal value. If I draw a star to represent 1 part, then this is what I would draw:

Now I can find out the cost of 5 pencils and 4 pens in terms of stars.

Now I use division to find the cost represented by 1 star.

Remember that the cost of 1 pen is equivalent to 5 stars.

(Can you find the cost of 1 pencil? Use your answers to find the total cost of 5 pencils and 4 pens. Is it $6? If it is, then your answers are correct! That's how you check your answers.)

Here is an easy worksheet to try with your child:

We have to think of this in another way.  I am going to use stars to represent boys and triangles to represent girls so it's easier to understand.

The phrase '3/4 of the boys' tells me that the total number of boys that were invited can be grouped into 4 groups. 3 groups attended the party and 1 group did not. 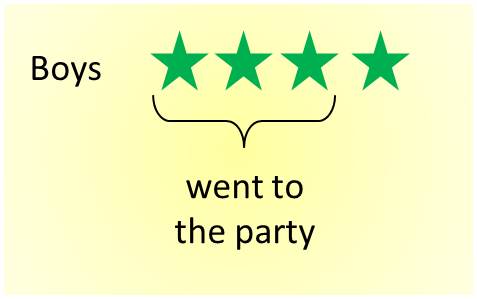 Similary, the number of girls invited to the party are grouped into 3 groups. 2 groups attended and 1 group did not. 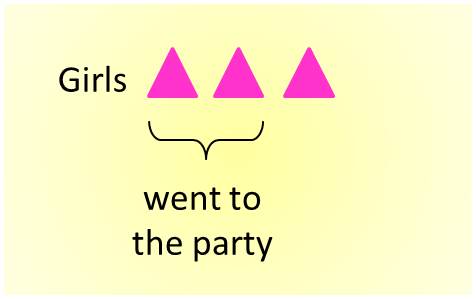 Since 19 kids did not attend the party, 1 group of boys plus 1 group of girls equals 19 kids.

We also know there are 20 more boys who were invited than girls who were invited. In other words, if we add 20 girls to the 3 groups of girls we will have the same number of boys and girls.

The next step I am going to use is the guess-and-check method. Keep in mind these conditions:

I start by drawing a table with 4 columns. 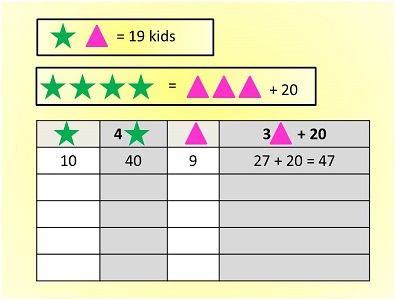 According to the second condition, these 2 numbers must be the same. Since column 2 has the number 40 and column 4 has the number 47, this means that my choice of 10 boys and 9 girls is wrong. 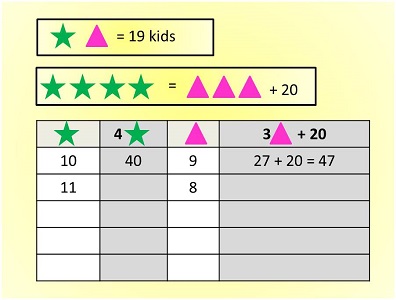 Now when I fill in columns 2 and 4, I will get the same number! 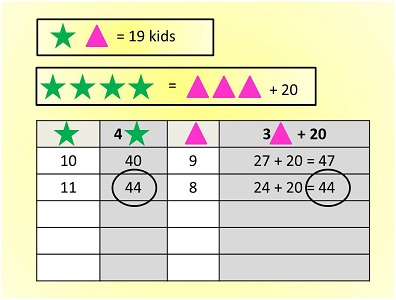 This means that each group of boys has 11 boys and each group of girls has 8 girls. Bryan invited 4 groups of boys, which works out to 44 boys.

He also invited 3 groups of girls, which works out to 24 girls. There are 20 more boys than girls so this condition is also fulfilled.

Bryan invited 68 kids to his party.