Basic Math Terms Every Student Needs To Know
(By Topics)

Click here to go to the Number Sense topic.

These are consecutive numbers starting from 1 (ex. 1, 2, 3...). Click here to learn more on Counting Numbers.

To write numbers in order means to write them in a particular sequence, either in ascending order (from small to big) or descending order from big to small).

This Math term refers to numbers that appear in running order (ex. 10, 11, 12...). The difference between each consecutive number is one.

These are even numbers that appear in running order (ex. 2, 4, 6...). The difference between each consecutive even number is two.

These are odd numbers that appear in running order (ex. 7, 9, 11...). The difference between each consecutive odd number is two.

For instance, the digit 2 in the 'tens' place has a value of twenty and a value of two if it is in the 'ones' place. 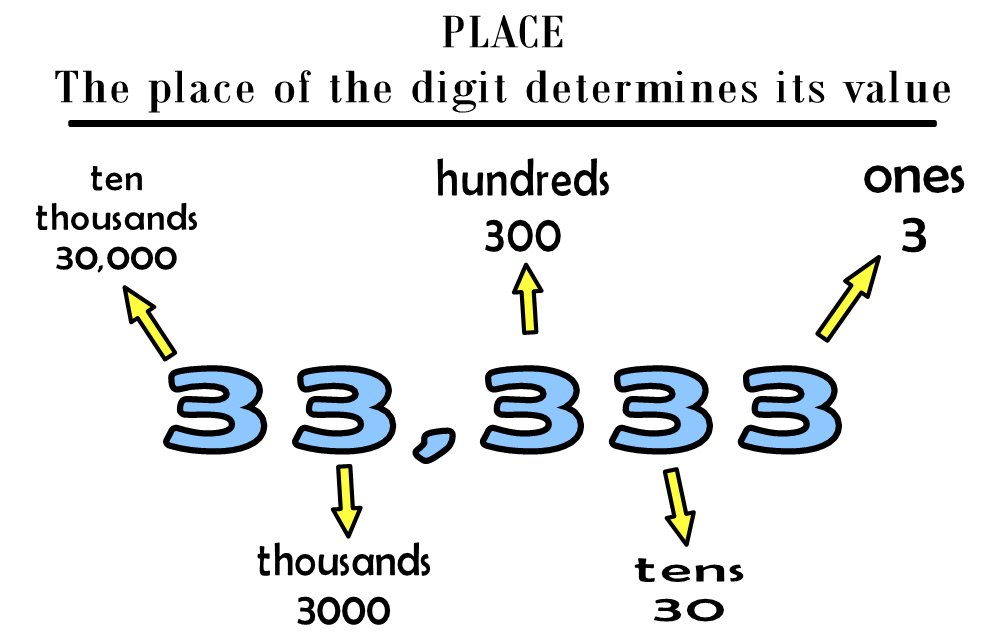 Addition is a basic Math operation.  To add means to combine numbers to form a bigger number. When we add, the addends are always smaller than the sum.

This Math term occurs often in problem sums. 'More ... than' also means 'bigger than' or 'in excess of' or 'extra'.

We usually, but not always, use addition with the term 'more ... than' in a problem sum.

We usually, but not always, use subtraction with the term 'less .. than' in a problem sum.

Multiply means groups of the same numbers.We can think of multiplication in 2 ways.

(This way of thinking about multiplication is very useful when working on problem sums.)

A multiple is the result of a multiplication.

Another example: The question "Is 24 a multiple of 5?" really means
"Can 5 be multiplied by any number to give the answer 24?"

Example: What are the first 5 common multiples of 2 and 3?

When we want the LCM or Lowest Common Multiple of 2 or more numbers, we want the first multiple that occurs in all the numbers being compared.

This Math term refers to the result of multiplication.

Division is a Math operation where you arrange (divide) a number into groups of smaller numbers. It is the opposite of multiplication.

There are 2 ways to think about division.

Or it can mean if you arrange 18 items into groups of 3, you will get six groups. 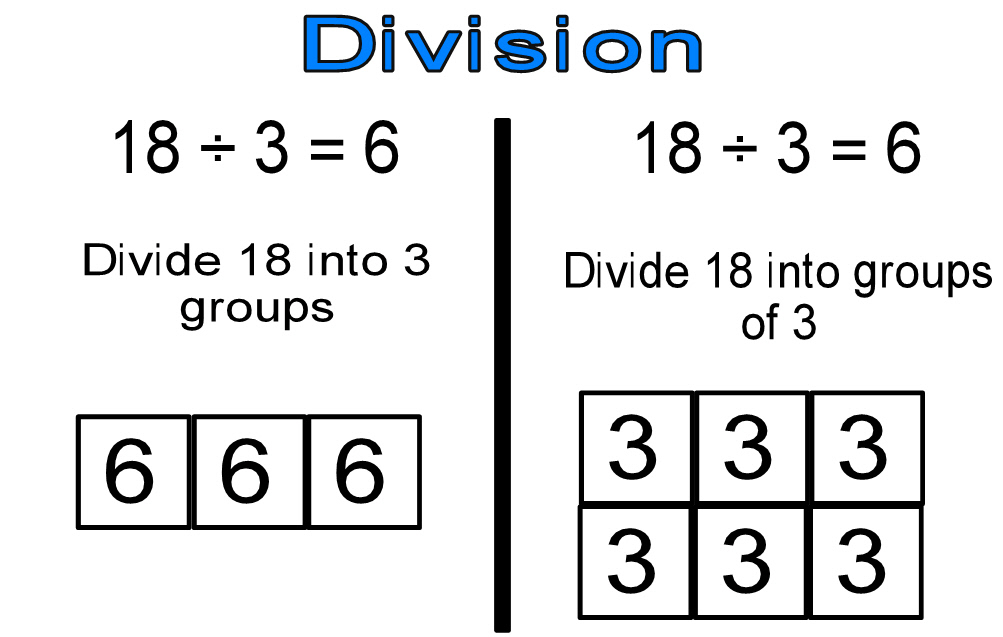 These Math terms relate to division. See the graphics below. 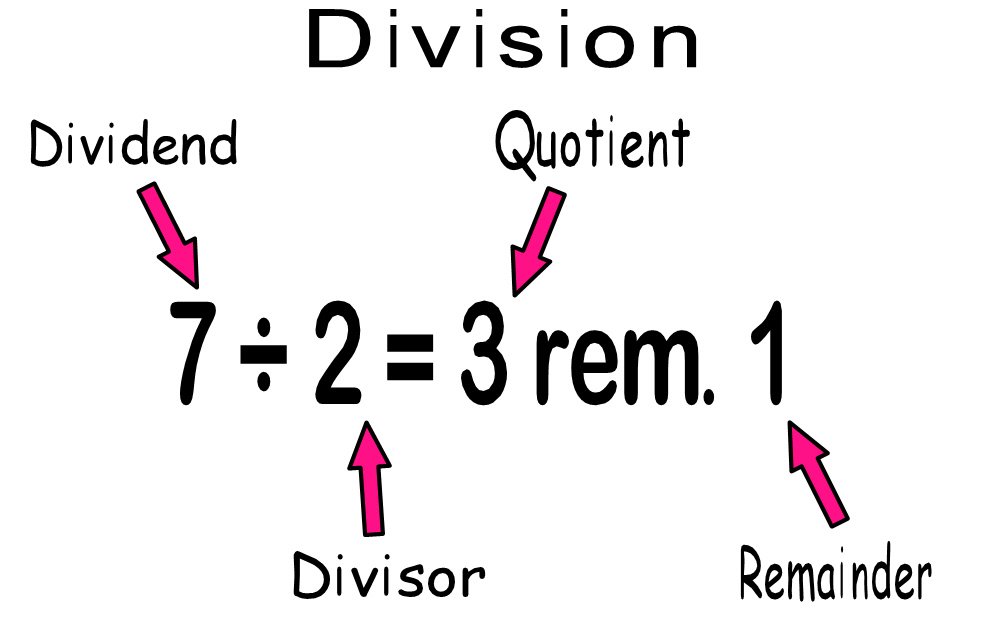 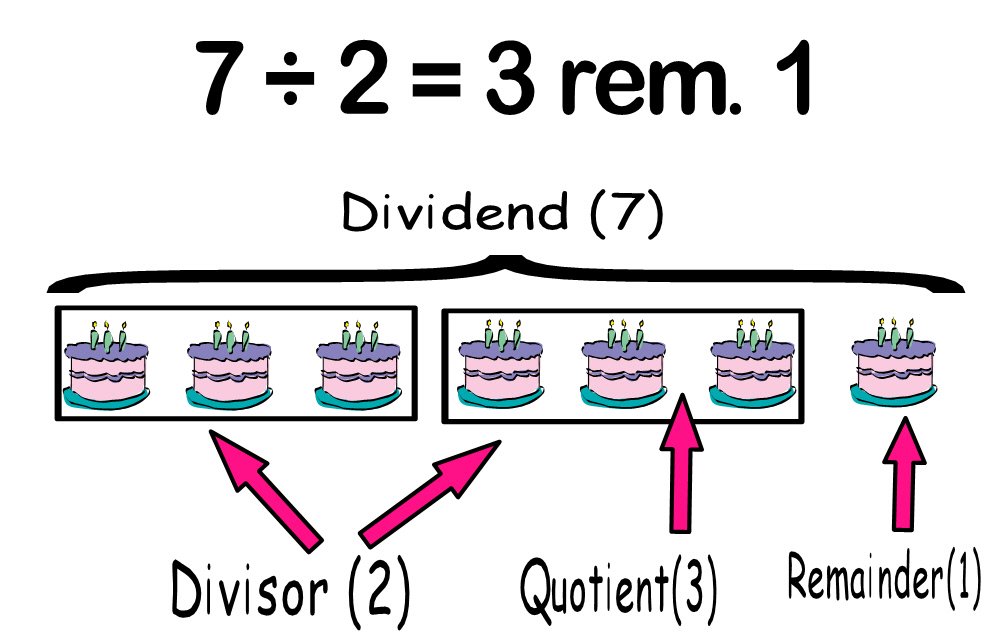 This Math term refers to division.

26 is not divisible by 3 because there is a remainder of 2.

This Math term is similar to the term divisible.

If we want to know whether 2 is a factor of 25, what we really want to know is
"Can 25 be divided by 2 without leaving any remainder?"

To find out whether one number is a factor of another, we have to divide the second number by the first.

If the result is a whole number with no remainder, then the first number is a factor of the second.

Sometimes we want to find the common factors of two or more numbers. A common factor is a factor that occurs in all the numbers being compared.

There is a fixed number of common factors between numbers.

Example: What are the common factors of 12 and 30?

If you want to find the GCF or HCF of a few numbers, you first find all the possible factors of each number.

Then you choose the biggest factor that can be found in each number.

There are two ways to look at fractions.

One way is to think of breaking up a whole piece into smaller equal pieces. So half a cake means cutting a cake into 2 equal parts and taking only 1 of the parts.Or one piece out of two pieces.

This way is called 'parts of a whole'.
The important thing to remember is that each piece must be of the same size as every other piece.

Another way to look at fractions is 'parts of a group' of items. In this case, each part does not have to be the same size. If there are 5 people in a room, two-fifths of them would mean 2 people (or 2 out of 5).

Fractions and division are related operations since we are breaking up a large number into smaller numbers.